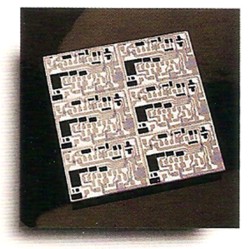 Used in the production of electronic devices, thick film technology uses conductive, resistive and insulating pastes or inks (Noble metal, ceramic or glass ink) screen printed in patterns which are ultimately fused at high temperatures. After screen-printing and curing of the paste, thick film circuits typically require a firing stage at a high temperature (500-1000°C) to fix the layers permanently on the substrate.

The substrates are fired by passing the substrates on a continuous belt through a multi-zone furnace.  In this furnace the parts are exposed to a number of phases including organic burnout, softening/melt, resistive compound formation, solidification, and finally annealing. Because of their ability to introduce high temperature quickly and precisely control temperatures in subsequent phases, infrared furnaces are used successfully in production environments for this purpose. Since substrates are able to absorb energy very rapidly from infrared sources, using an IR furnace can result in fire rates 3 to 4 times faster than conventional convection furnaces.

As a result of the high equilibrium heat transfer, dwell time in a near infrared furnace is quite short compared to a conventional convection furnace.  The physical structure of thick film materials is developed very quickly, and the overall time/temparature product is relatively small.

Because of the very rapid internal accumulation of temperature during the volatile burnout stage, due to high ambient atmosphere temperature (850-950°C) and the peneterating power of high intensity short wave radiation, the organic volatiles within the inks essentially sublime completely from the structure without eruption. Structure depths up to 300 microns thickness are possible without the unacceptable diffusions and migrations of materials encountered in conventional processing.

For most thick film processes in these infrared furnaces, the rate of temperature rise in the product can be made quite fast, the volatilization and sublimation of organic binders being completed long before polymerization of fusion temperatures are attained.  To achieve this result, the first zone is driven as hard as practical to maintain the highest intensity short wave radiation (near infrared), reaching process temperature at the beginning of subsequent holding zone(s).  The holding zones are set to produce process fusion or polymerization temperatures in the product. Dwell time in these zones should be just sufficient to drive the pyrolysis or polymerization to completion. By limiting the time at temperature in this manner, unacceeptable migrations or diffusions can be avoided.

Testing has shown that substrate cracking is somewhat, if not entirely, dependent on cooling rates. Engineers can adjust flowrates to the cooling system to provide cooling rates consistent with high yield and throughput without promoting cracking.

Critical to the process, the atmosphere must be controlled with clean dry process gas to prevent contamination of the paste.  For most processes (except copper paste) the clean dry air (CDA) is supplied an effective and economical process gas.   The preferred method of introduction of process gas in an IR furnace is through the furnace walls with gas supplied in the first zone at twice the rate as in subsequent zones. Process gas and volatiles are drawn toward the entrance of the furnace and out a venturi assist exhaust stack.

New advanced materials can require firing and often cooling in an low oxygen environment.  LCI furnaces with CACT closed atmosphere cooling provide owners with the ability to modify the flowrates to each segment of the furnace and achieve a very low oxgen environment (typically below 100 ppm, some systems run with O2 levels well below 20 ppmv).  LCI furnaces can be equipped with DGO (dual gas operation) which allows nitrogen to be supplied independently to all auxiliary portions of the furnace while nitrogen or forming gas (FG = 96% N2 / 4% H2) is introduced into the furnace chamber.

TF-Series production infrared furnaces offer precise control of parameters critical to thick film production processes. The TF-Series delivers 1000°C high temperature processing, stabilizes within 10 minutes, and allows operator to control the atmosphere and flow of process gas at multiple stages. The new furnace DDC control system indcludes sophisticated 4-stage PID temperature control and efficient power management by zone. Operators can easily enter zone setpoints and belt speed for each paste or substrate system. Changing recipes is quick and easy. Once recipes are entered the furnace stabilizes to the new settings within minutes (often less than 10 minutes). TF-series are built-to-order and configured to perform at the highest levels for its destined production room environment.